Today is the day to reveal the cover for a novella series I’m writing with a friend. The series is called D.E.M.ON. Tales. It’s a series of 28 e-books, A to Z plus 13 and 666. I’m writing the first book, Assassin Eco-Corpses, and MJ Moores will be doing the next one, then me, then her, etc. We’ll each have input into all stories.

Despite the name, D.E.M.ON. Tales is not horror, more an urban fantasy, tongue-in-cheek series. Think Men in Black meet Supernatural. The setting is Ontario, current time, and the HQ is in the town of Aurora, a little north of Toronto.

Assassin is scheduled to be released at Amazon on October 31. Happy Hallowe’en.  The plan is 4 per year, with a print version of each set of 4.

Blurb, which is currently in edit mode:

The D.E.M.ON. Agency grew complacent with only minor monsters and cryptids poking around over the last year. Charged with the merciless task of protecting Ontario from things that go bump in the night, these agents spent the last hundred years ridding their region of the most bad-ass demons and monsters alive … or was that dead? At least, that was their M.O. until a year ago. Now their duct cleaning front morphed into more of a full-time gig. But, when the silent alarm blinks to life in the middle of another lazy morning all hell breaks loose.

And the cover is … drum roll please. 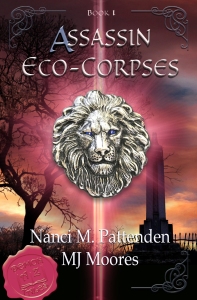